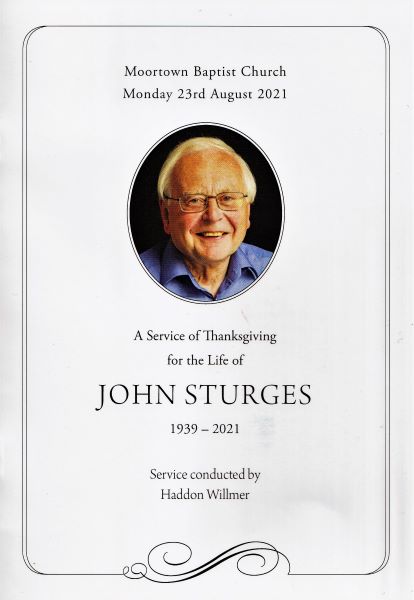 John Sturges who died on Tuesday 27th July at the age of 81, was a Midlander who converted to being a Yorkshireman in the late 1960’s. Brought up in Birmingham John grew up in a Baptist Church and committed his life to Christ in his mid teens. He also met his future wife Alison in church.

From school John started work as an engineering apprentice and came to Leeds and MBC when he moved to Leeds University as a Metallurgist. He later worked at Leeds Metropolitan (now Beckett) University rising to be a Professor.

Here at MBC John was elected to the Diaconate in 1970 and served for 5 years. He played a notable part in putting the church’s finances on a secure footing and also in the reorganisation of the Sunday School into the Family Church system we are still familiar with. Alison played a leading role in Church Playgroups for pre-schoolers and also in Brownies and Cubs. They were an integral part of the church from the 1970’s onwards and faithful , loyal church members. Sadly Alison died early, ten years ago.

Both John’s professional and Christian interests were broad. As a materials scientist he produced numerous papers and books and was a respected teacher. Latterly he became very involved in issues of sustainability and climate change. In fact on this website you can find a series of articles John wrote about that very subject.

In his late seventies John again served as a Deacon besides continuing to work academically and also volunteering as a counsellor at St Gemma’s Hospice. His long early morning walks were legendary among close friends.

John’s sudden and short illness leading to his death has shocked many and prevented him completing ongoing work. However, he spoke frequently of how blessed he was in life and of his confidence in his faith.

There have been many expressions of love and respect for John in the church. We uphold his daughter Julia, son David and their families before God at this sad time.

Only a few weeks ago John recorded a series of prayers for our online Church at Home Service. Below you will find a link to the final part of that recording in which he concentrates his thoughts on Moortown Baptist Church.