As a church MBC has a long history of promoting and supporting worldwide mission and development work through the Baptist Missionary Society (now often called BMS World Mission). During the lockdown we are continuing to send a monthly donation from the tithed giving direct to BMS.

We also have a number of people who further support BMS through monthly giving and/or annual gifts through the Birthday Scheme. For those using envelopes placed in the collection, this type of giving stopped at the end of February. Whilst we are unable to meet for services, we would ask that you consider making your donations direct to BMS at www.bmsworldmission.org This will ensure that the money gets to the work among some of the poorest and most marginalised in the world immediately – including the frontline work of our partner missionaries Mark and Andrea Hotchkin in Chad.(below left) 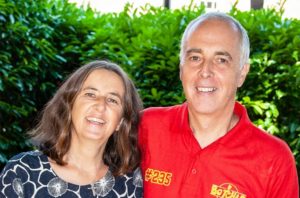 If you could also let me know when you make donations with the amounts, they will be then recorded as MBC giving. roger.robson1@ntlworld.com or 07929100598.

Some of you, in fortunate circumstances like me, may have found that in lockdown you actually have more money to spare. (I know the opposite is true for others).

The recent government announcement of the decision to merge the Foreign Office and Dfid (Department for International Development) has dismayed the many charities (Christian and secular) which work in the poorest countries. Dfid, (and I declare a personal interest as my daughter worked in the Department for several years including a 2 year posting in parts of Africa), has a very good reputation in the world and is currently responsible for using 0.7% of GDP in aid and development – often channelled through Christian Charities including BMS.

There is already talk of moving funds away from the poorest countries to other potential allies or trading partners and references in the media to “Charity begins at Home” and “Looking after No 1” (hardly Christian aphorisms). As a result, 200 charities – including Tearfund, Christian Aid, Traidcraft, Save the Children and Action Aid – have written to the government saying:

“Abolishing one of the world’s most effective and respected government departments at a time when the world is in need of global leadership, undermines our response to Covid-19 and suggests the UK is turning its back on the world’s poorest people”

We each have to decide our own views on political decisions, but, if you do have money to spare perhaps you will consider donating to one of those charities to show that Christians are definitely NOT turning our backs on the world’s poorest.