In 1972 two young students who worshipped here at MBC (Paul Hicks and Jean Mackintosh, later became Mrs Jean Hicks) travelled to Romania on a mission to deliver books to a local pastor who had returned home after studying at Regent’s Park College in Oxford. The rest as they say is history.

In brief, between then and now members of what eventually became MRS G (The Moortown Romania Support Group) have made dozens of visits to numerous parts of Romania. During these trips they have, either with their own hands or by way of donation and fund raising helped to fund churches, pastor’s salaries, children’s summer camps and village building schemes as well as a whole host of other projects and plans.

However, in more recent times all this travelling hasn’t always been one way with members of several Romanian churches, their families and friends, often leaving their homeland for the very first time making visits to the UK.

In one of the first groups to visit Leeds was a nine year old pastor’s daughter called Szuszi Soos. Fast forward to today and Szuszi and her husband Andor, alongside another minister are themselves co-pastors of a Hungarian Reform church in the town of Odorkeui Secuiesc, a fellowship that pre Covid-19 regularly attracted a Sunday morning congregation of over 400 people. 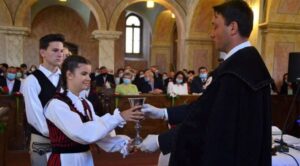 Recently Szuszi and Andor, who now have two children of their own and who only moved in to their present church in January sent us these charming pictures of a suitably socially distanced Confirmation Service.

It’s lovely to look back over all those years and to see how such a seemingly simple gesture (although I’m sure nothing was that simple in 1972 in Communist Romania) as delivering some books to a newly ordained minister could have led to what has to be one on MBC’s longest, warmest and mutually rewarding initiatives.