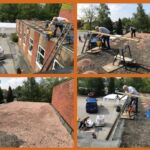 On what turned out to be one of the nicest days of the year (so far) MBC’s unofficial maintenance team were hard at it clearing out the gutters before spreading’s something like “a couple of tons” of small aggregate on the church roof. Here is a collage of a few pictures that Rod and Phil sent in; some are of the team actually working whilst one caught them doing what they do best… drinking tea. Thanks to project manager Rod, Howard S, John D, Roger, David V, Paul C, Martyn, young Sam (who brought the average age down considerably) and Phil. 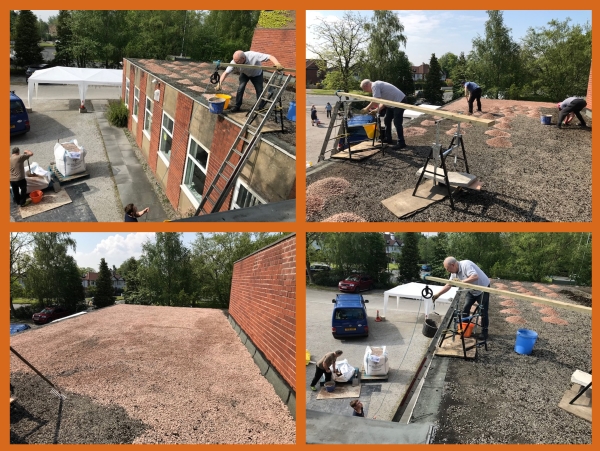 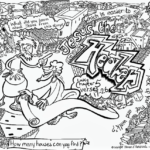 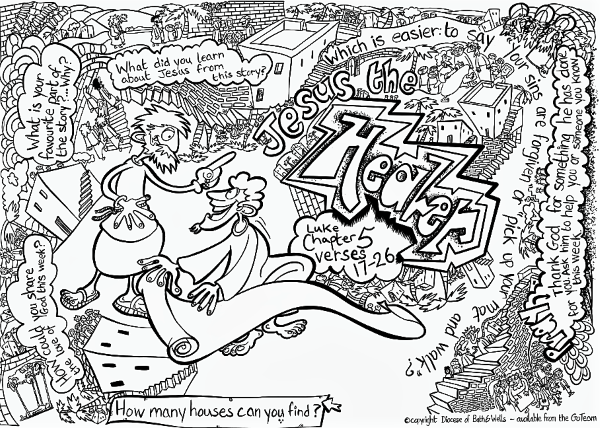 This coming Sunday, May 30th we reach the end of our Journeying with Jesus series. On this final week we look at Jesus the healer taking Luke chapter 5 verses 17 to 26 as our text.

Phil Commons will be in the chair for our live stream welcome (10.45am on Facebook) and then after that you can switch over to our YouTube channel for our pre-recorded programme a link to which is HERE

As usual there’s a chat mat which you can either download from HERE or pick up from the box in front of church. 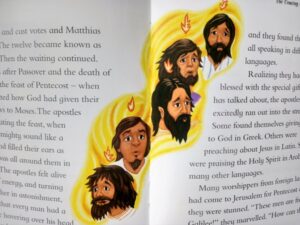 This Sunday we celebrate Pentecost. It’s the day we remember that amazing moment when the friends of Jesus received the power of God’s Holy Spirit. This is the same spirit that Jesus gives to you and me, the spirit of truth (John 14:17) God with us (1 John 4). There are a few ways in which we can celebrate together. For instance here’s a link to our YouTube playlist a mix which includes songs, bible teaching, prayer and more.

There will also be a live stream on the Moortown Baptist Facebook page 10.45am -11 before the playlist. If you are on Facebook, do join in and share some thoughts to encourage each other in the comments as you watch.

Also I’ll be opening up a breakfast virtual ‘upper room’ at 10am for half an hour for anyone who wants to join for prayer, listen to some music, hear from God together.  Feel free to bring your breakfast.  All ages welcome.  There’s no pressure to say anything, although opportunity to share if you want to, its just a time to come together like the disciples did. Details below…

Finally we’ll be making cake in a cup on Sunday so here’s your list of ingredients so you can be prepared to bake along (It could get messy!)…. 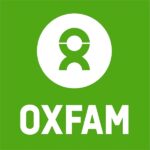 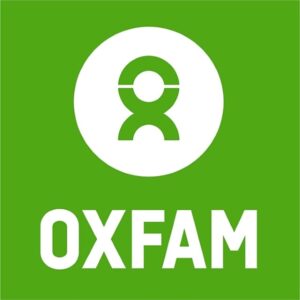 John Doran who is the Area Volunteer Coordinator for West Yorkshire has been in touch to ask us to share a need. Here is his letter.

Our Oxfam shop on Harrogate Road at Moortown is currently in need of volunteers, and I wondered if you could ask your members if anyone would be willing to help.

There are a number of different roles, on the till and shop floor and in the sorting/pricing room too.  The work is varied and fun, and we usually ask volunteers for just four hours of their time each week.

If anyone is interested they can call or email me directly or they can visit the shop where Lisa, the lovely shop manager, will be very happy to talk to them. 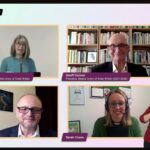 This morning in place of our usual Church at Home playlist we joined with over 5,000 other worshippers for the Baptist Union Assembly’s online Service for All. The Assembly began last Thursday evening and over the course of the last few days it has played host to a whole raft of activities and events.

Throughout, the gathering’s keynote speaker has been American evangelist, activist and author Shane Claiborne (above) who today delivered a powerful and inspirational message based around the theme of “Heal our hearts – Heal our street – Heal our world.” 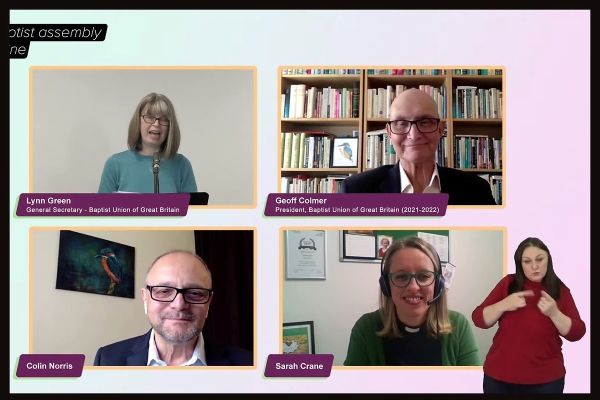 However, one very special moment for many of MBC’s long serving members must have been when Geoff Colmer (top row right in the pic above) was inducted as the Baptist Union’s 2021/22 President. Geoff began his Christian journey here at MBC and is remembered fondly by many people.

With musical contributions from choirs and bands from as far apart as East Lancashire and Uganda, bible stories, prayer and a moving appeal on behalf of BMS World Mission for help funding Covid-19 support the Service really did reach out across the whole world. 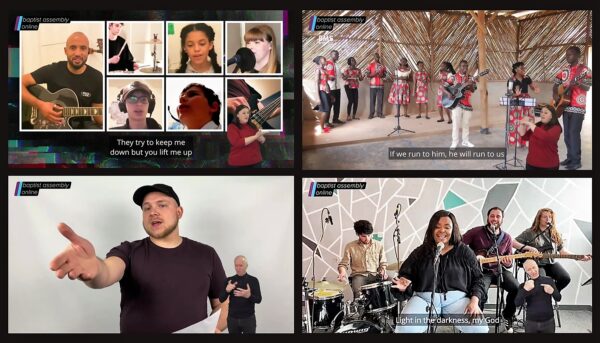 You can catch up with this morning’s Service, and find the links to the funding appeal by clicking on this link HERE or if you would like to follow any of the Assembly’s other features simply visit 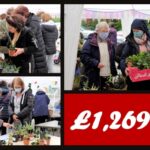 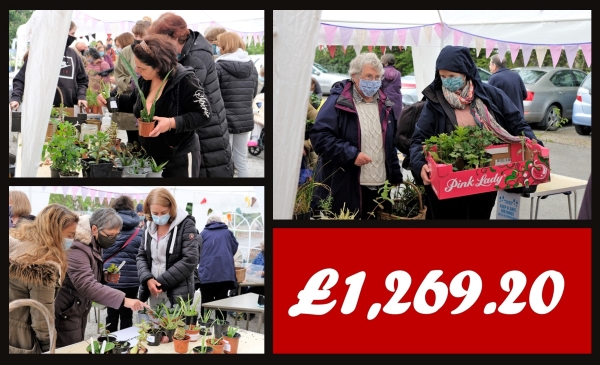 But even with Jenny, Nicky and Karen at the helm, like every successful event an awful lot depended on team work. That’s why there’s a special mention for John Duffy, Paul Chadwick, Howard Slater, Rod Russell, David Vale, Howard Dews and Roger Robson for help with the second gazebo. Further help came from Kate, Jean Carlisle, Karen Handley, Jan and Geoff and Helen Colling plus there has to be a special mention for Steve Olinjick following his heroic efforts helping to transform the new garden.

The money we raised goes to two churches in Romania. One is in Oedeheu, and which is pastored by our friends Zsuzsi and Andor. Together they plan Christian summer camps for young people, so besides helping them fund a large weekly youth club our donation will go towards that. The other church is in Cluj where our support is used to support university students and a gypsy pastor.

However, the final word of thanks needs to go to you. To everyone of you who braved the torrential rain and either donated or bought plants. 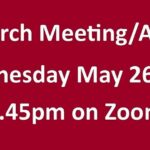 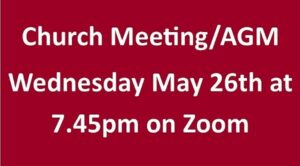 Your Interim Leadership Team invite you a Church Meeting/ AGM at 7.45pm on Wednesday the 26th of May. A Zoom invitation and an agenda have been sent out by email in the usual way.

As this is the first meeting since the team was elected this will not only be a good opportunity to hear what has been occupying their minds but also for you to share your thoughts.

Like so many other things this year’s Baptist Assembly is taking place virtually. It runs from Thursday the 13th of May until Sunday the 16th. Below you will find a full programme of events including, by following this link what looks to be some brilliant activities for children.

To show MBC’s support for the Baptist Union, and also by way of a change we thought that on Sunday May 16th, and following a 10am Zoom Communion in place of Church at Home we could as a whole church join with congregations and assembly delegates from all over the world for a very special online service. The Service for All begins at 10.30am, lasts for just over an hour and can be accessed by either clicking HERE or by going direct to https://www.youtube.com/watch?v=n6h5vVaPfjM

Not just for Service for All, but throughout the entire 2021 gathering the keynote speaker will be Shane Claiborne (see video and then the text below*) who will be exploring the theme: Heal our hearts – heal our streets – heal our world.


Besides Sunday morning’s Service for All the four day event will feature seminars, times for reflection and prayer, BU elections and presentations from a number of affiliates. THE FULL ASSEMBLY PROGRAMME IS AVAILABLE EITHER HERE  OR AT The Baptist Union of Great Britain : The Baptist Assembly Please note that to take part in some of the sessions (but not the Sunday Service) you may be required to register.

* Shane worked with Mother Teresa in Calcutta, and founded The Simple Way in Philadelphia.  He heads up Red Letter Christians, a movement of folks who are committed to living ‘as if Jesus meant the things he said’.  Shane is a champion for grace which has led him to jail advocating for the homeless, and to places like Iraq and Afghanistan to stand against war. Now grace fuels his passion to end the death penalty and help stop gun violence.

Shane’s books include Jesus for President, Red Letter Revolution, Common Prayer, Follow Me to Freedom, Jesus, Bombs and Ice Cream, Becoming the Answer to Our Prayers, Executing Grace, his classic The Irresistible Revolution, and his newest book, Beating Guns. He has been featured in a number of films including ‘Another World Is Possible’ and ‘Ordinary Radicals’. His books have been translated into more than a dozen languages. Shane speaks over one hundred times a year, both in the USA and internationally. His work has appeared in Esquire, SPIN, Christianity Today, TIME, and The Wall Street Journal, and he has been on everything from Fox News and Al Jazeera to CNN and NPR. He’s given academic lectures at Harvard, Princeton, Liberty, Duke, and Notre Dame. 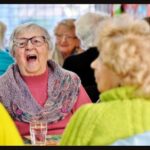 Following on from the recent sad news of Irene Wyatt’s death two more of MBC’s long standing members have died.

Clare Newton (above) who was 93 and Muriel Ritchie, 92 have both passed away within the two weeks. Please hold their families in your thoughts and prayers.

We make absolutely no apologies for using the pictures above in such a setting because this to us was Clare; as lovely as she was lively. 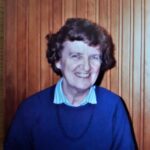 Besides Muriel and her late husband John being regular attenders of our Sunday services Muriel (left) served for many years as the host of Moortown Baptist Church’s very first women’s only housegroup.

Both will be greatly missed. 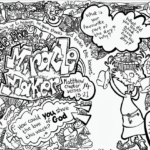 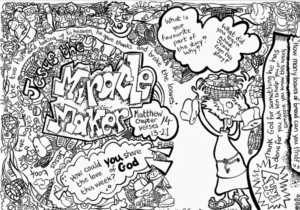 This week our theme for Sunday is ‘Jesus the miracle worker’. It’s available on our YouTube playlist a link to which is HERE and we have a Facebook live introduction from 10.45 to 11am which you can get to HERE.
I do hope you are finding this series helpful. Thank you to those who have shared their thoughts on it each week and encouraged others who have taken part. Despite the challenging times, it’s been good to see so many people contributing to leading people in worship, teaching, prayer and conversations including many who have stepped out in faith to do it for the first time.
Focusing on Jesus reminds me of a song I used to sing when I was little…
When the road is rough and steep,
Fix your eyes upon Jesus,
He alone has power to keep,
Fix your eyes upon Him.
Jesus is a gracious Friend,
One on whom you can depend,
He is faithful to the end,
Fix your eyes upon Him.
“So we fix our eyes not on what is seen, but on what is unseen, since what is seen is temporary, but what is unseen is eternal.”  2 Corinthians 4:18
As usual Chat Mats are available to download HERE or to collect from outside MBC.
I pray we all see Jesus this week.
God bless
Shelley